I was born and raised in Athens, the sunny homeland of Plato. Due to my passion for ancient Greece I studied Classics at the National and Kapodistrian University of Athens and I nourished this passion by obtaining a Master’s degree in the Reception of the ancient theatre to the modern literature. 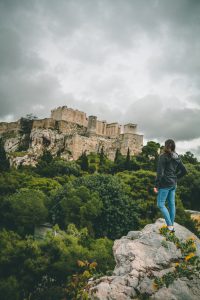 However, I was lucky enough to early discover another great love: helping people to communicate in my native language. For this reason, I was soon oriented to this field by attending workshops and seminars and by completing the “Routes in Modern Greek language”, a distance learning program of the Center of Greek Language which offers official state recognition of the teaching competence. My professional experience started in 2014, a year after my graduation. Since then I teach modern Greek language and literature to adult learners of all levels in my city and online and I also create and share content for my online, “sweet Greek” community!

My professional experience as a teacher of Modern Greek language to adult learners started in 2014. Since then I have collaborated with Greek schools, embassies and foreign companies whose executives are based
in Athens.